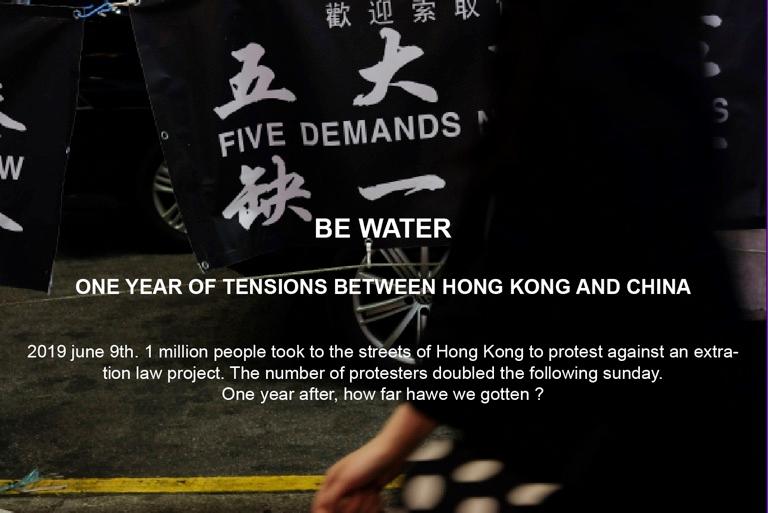 Hong-Kong, June 4th 2019. Like every year on this day, Hongkongers gatherered in Victoria’s Park for a candlelight vigil in memory of the Tiananmen massacre. 180 000 people have marched in silence for this 30th anniversary. There was no inkling of what was to come 5 days later.
Nevertheless, this anniversary date will be remembered as the premise of a long protest movement that is still ongoing.
On sunday june 9th, a million of protesters took to the streets of downtown. The following sunday, they turned to 2 million.

6 months later, the last authorized demonstration has gathered 800 000 people. Meanwhile, local elections took place, with the crushing victory of the pro-democracy party (which has won 17 districts out of 18), and the extradition law (1) that stirred up the anger has been withdrawn.

After a few months of stagnation, tensions escalated again approching the 1st anniversary of those protests. The last echoes from Hong Kong reported violent clashes between pro-government legislators and opponents, a national security law forbidding any seditious or subversive activity… The game of intimidation between the island and the continent has been taken one step further as the sanitary crisis makes any demonstration illegal.

Beijing was hoping the island would bow down in this endless battle. But more than 20 years after the handover, Hong Kong is still fighting every attempt from China to reduce its rights.

Only places that do not exist can escape being possessed

The peninsula has been cut off from China in the mid-19th, given to Great Britain for a period of 150 years and somehow, China considered this part of history as a gap, a blank period, almost inexistant.

On a map dating from 1850(2), drawn by an anonymous chinese cartographer, the island has been simply erased, as if the author did not want to recognize this foreign occupation. By these means, he admitted the island was extra-territorial, a piece of land independent from the world : « Only places that do not exist can escape being possessed », writes Kai Cheung Dung in his essay « The Archaeology of an Imaginary City ».

Hong Kong’s identity is as floating nowadays as it was a decade and a half ago : a city-state, a region or a country ?

By agreeing to maintain the british colonial system, China and Great Britain have turned this ex-colony to a strange entity, based on the « One country, Two systems » concept.

On the threshold of the handover, locals were hoping nothing would really change.
More than 20 years after, how far have we gotten ? What are the reasons of the anger ?

This slogan shouted during protests refers to the 5 following claims :

This last claim is the most symbolic, not to say hypothetic. « I am pessimistic about the transition to democratic vote » says Edward, a young Hongkongese, « It is written in the basic law but ambiguously formulated – it would be a step-by-step process, with no date indication. However, the principal demand is the creation of an independent inquiry about police violence. If this demand was met by the government, it would be a good step forward. »

Many youtube videos showing policemen using guns or protesters attacked by triads (on 2019 july 21, without police response despite numerous calls) tarnished the image of the Hong Kong police. This last incident known as the « Yuen Long Attack » has strenghtened suspicions about a police force controlled by Beijing.

Seen from abroad, these acts of violence spark fears of a dramatic outcome, recalling the Tiananmen massacre. But for Edward, « the power of Hong Kong police has its limits, people can not be held without charge. Beijing can not send the army because it would undermine its image. »

Hong Kong is not China in 1989 and for Edward, the comparison is not relevant : « Today’s protesters are not the Beijing students that occupied TianAnmen square. We don’t trust the government but our claims are less radical, because Hong Kong’s economy is not so bad, people have work. »

In fact, the movement aims to preserve the actual system rather than to change it, as explained by Jean-Philippe Béja, director of research at the CNRS : « This movement includes all ages, all social classes. It is a whole society that defends its specific identity, its system. It is a big conservative movement and not a revolutionary movement at all. » (3).

Behind the independentist slogans lies a deep resentment against the Chinese that settled in the city.

For Edward, « the chinese government’s policy is to colonize Hong Kong. 150 chinese migrants per day are accepted for « family reunification ». But most of them are retirees whose means are to benefit from the health care system and public housing. Chinese companies in Hong Kong prioritize chinese people, giving them the best jobs. »

Hearing his words, I start realizing that Hong Kong is becoming a 2 speed society :« We wouldn’t be in the streets if we had good jobs. Our generation feels hopeless. We can not by our own house, build a future. »
Indeed, social inequalities have increased year by year as wage growth didn’t follow the strong inflation trend. Buying a 60m2 flat equals 22 years of wage (for a median salary of 22 000 €) against 6 to 7 years in Paris.

Although facing an insecure future, without financial resources, Hong Kong’s youth doesn’t address any economical demand : « Young people aren’t really concerned about those questions. In fact, they would love to see the economy fall apart and US sanctions imposed against Hong Kong, so that China could not use the island as a corridor to bypass those sanctions.
The young generation is running short of ideas. For them, democratic vote won’t change anything because finance is controlled by China. They use an expression, « Hug together, die together », to picture this state of mind. »

March 2020. Time has stood still after the outbreak of the coronavirus crisis. Usually restless, the city seems much more quiet. Mass demonstrations have been forbidden, but opponents still find ways to express their anger… Every week, underground gatherings are relayed through social networks, taking place in several locations at once in order to escape police arrest.

« Be Water » became a popular hashtag on social networks. This motto taken from Bruce Lee illustrates the protestors’ strategy : Be fluid like water, fill the space and adapt to all situations. A metaphor for resilience in other words, a portrait of the ever enduring Hong Kong’s youth.

A new activism has taken shape, carried on by a generation that, for most of them, wasn’t born at the time of the handover. « The movement reached a peak last summer, then it calmed down in january, after the Taiwanese presidential elections », says Edward, « but I believe this movement will regain its force with september’s legislative elections. The wave will rise again. »

(1) This law would allow people arrested in Hong Kong, a semi-autonomous territory, to be sent to mainland China.

(3)  Conference at the INALCO Institute, December 10th, 2019, Jean-Philippe Béja, Director of research at the CNRS.